At his Mini Budget, Mr Tito Mboweni illustrated his concern with our dwindling economy with an Aloe plant in a pot (See Beeld photo below). We support his drive to deregulate and grow the economy and look forward to him using the resilient air plant, the Tillandsia  to illustrate deregulated growth.

The Tillandsia flourishes without water and soil, similar to entrepreneurs who grasp opportunity and create wealth in any circumstances.

Cofesa’s chairman, Dr Lawrence McCrystal and Adv Hein van der Walt, director calls in their  message at the 30th anniversary of Cofesa, for urgent deregulation to “… exceed our own expectations” – the words of the then President Nelson Mandela to Francois Pienaar, Springbok captain before the Rugby World Cup 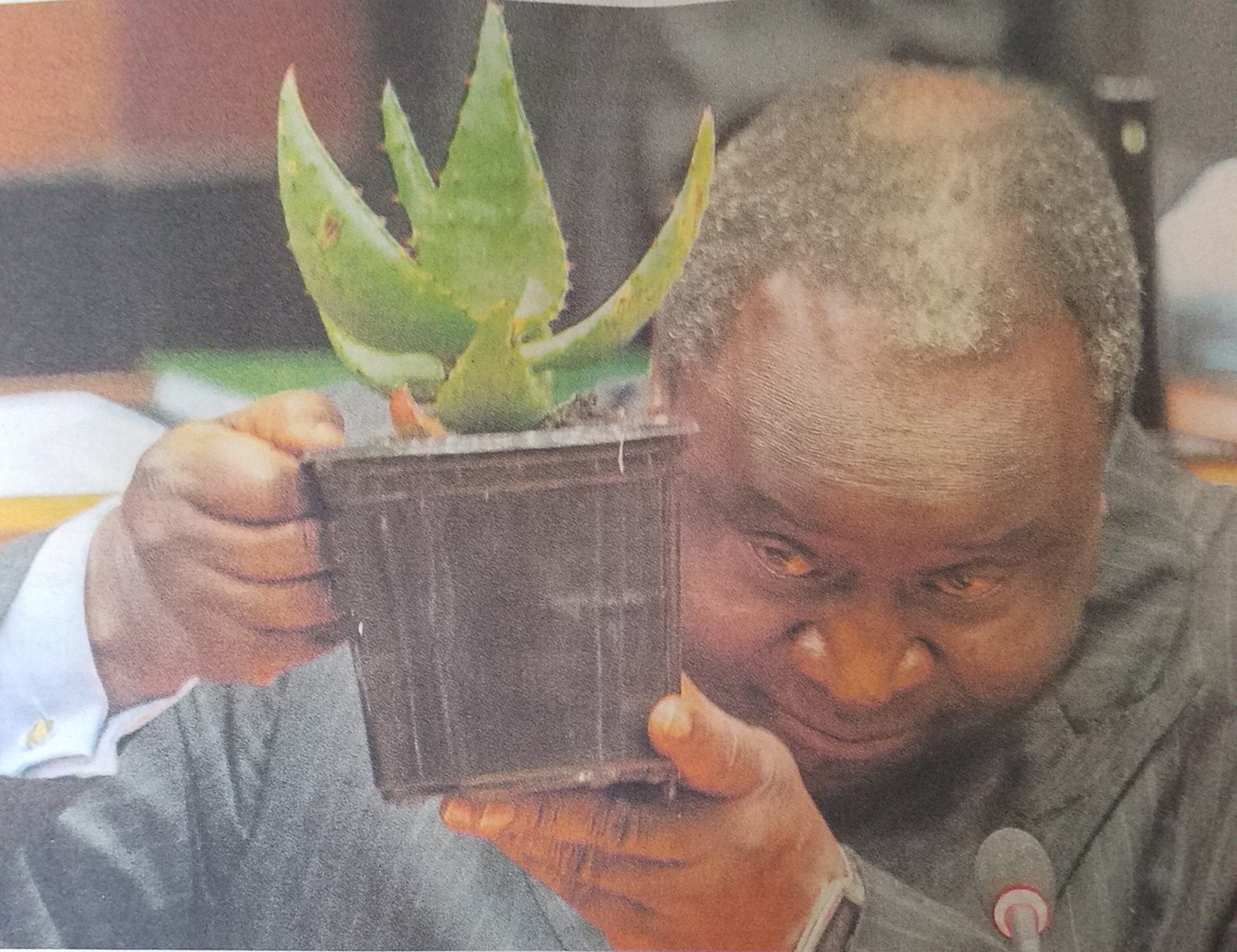 We sincerely thank every present and past member, every Cofesa official, alive and departed, for their loyal contribution to make this moment possible, and above all we thank God who blessed us all during challenging decades.

During this time we shared the trauma of employers who faced  barrages  of legislation harmful for business, extremely high taxes (with lack of service delivery), increasing energy costs, topped  by poor import policies that exposed local manufacturers to cheap imports. We relentlessly campaigned against these tendencies that caused unemployment to rise from 4m in 1994 to today’s 10m.

However, from the level of small and medium businesses, we feel it is also important for President Ramaphosa to attend the process  to retrench more than 50 employees, some of whom have worked at the firms for 30 and others for  even more than 40 years.

The one firm is forced to close down after 75 years in business and the other one after 35 years.

Deregulation at no cost will immediately stimulate the economy

Instead of chasing investments we urge the President to use the powers he already has to deregulate small and medium enterprises.

Like Margaret Thatcher did in Britain and Jim Bolger in NZ, with phenomenal results, relieve our members from the burdensome Bargaining Councils which increase wage bills by between 18% and 33% and the racist and destructive effects of the Black empowerment rules.

To turn around the economy we need a ‘defining moment’, similar to

At no cost to the Government, picking these  ‘low hanging fruit’ of reform will defeat poverty

The World Economic Freedom Audit of 2019  recognized our economic potential. Picking ‘low hanging fruit’ will be at zero cost to Government and, we calculate, could generate, over time, between 22m and 30m jobs in S.A. plus more than 50m jobs on the African continent, and regain our lost position  in relation to the following countries:

We need to fast track deregulation, commercialise, privatise and collect 15% VAT on a thriving economy, as well as company and personal taxes. Only business can create jobs, if permitted by Government.

Incentivise (The successful auto manufacturing industry incentives initiated before 1994, should be imitated  for agriculture and other industries). Government’s incentive of R31bn for the Automotive manufacturing renders a positive trade balance of R84.7bn. It contributes 7% to our GDP and 12% of our total exports: R115,7bn in 2014 with 300 000 jobs.

Transformation is part of the legacy of the ANC – Disbanding agricultural control boards –  The legacy of the ANC and Mr Derek Hanekom is credited for today’s thriving global agriculture exports. We applaud his vision and decisive role in disbanding the outdated agricultures control boards in 1994. – Landbouweekblad’s 100 1919-2019 ‘n Eeu op die platteland’ commemorates his monumental accomplishment.(Page 9).

Since 1994 the gross value of the agriculture sector has increased nine-fold  and was about R277bn in 2018, according to data from the Department of Agriculture, Land reform and Rural development, with a positive trade balance of R81.3bn,  7% of GDP, 8% of total exports,employing 700 000 workers.  A global demand for food creates lucrative trade opportunities and government incentives will have a major impact.

Fundamental reforms are the catalyst for an ‘Africa Marshall Plan’, an ‘economic new dawn’ to eventually change the face of the continent

Fast tracking the implementation of the AfCFTA (the African Continental Free Trade Agreement), which not only provides access to a continent-wide market of 1.2 billion people worth $2.5 trillion, but also effectively places Africa as the world’s largest free trade zone by population.

Water “highway” from the Nile river to the Western Cape

The AfCFTA now makes possible a water “highway” from the Nile river to the Western Cape which would promote economic development all along the way. The canals could also be navigable for trade, agriculture and tourism.  These plans would generate great economic development for S.A. and other African countries as well as attract foreign investment.

Water development  The Water Commission back in 1970 concluded that SA will, in due time, need to bring water from surrounding countries to help S.A.  That  is where the Lesotho Highlands Scheme started.

Africa economic new dawn: We welcome President Ramaphosa’s fresh approach, business insight and desire to do things differently. May we again become a prosperous country and continent for the sake of all our citizens, a place where people want to do business.

Not words but action will defeat poverty

In a bid by SA Government to spread awareness around the COVID-19 pandemic, it has been asked that all website owners in SA place a link to the COVID-19 portal. For more information about the current COVID-19 lockdown in SA, visit the South African Government’s COVID-19 Portal:

Be Safe. Be Kind. Be Responsible